The Dakota building is best known for a dark and sombre episode in pop history. It was here where John Lennon lived with his wife Yoko Ono, and it was in front of this building where Lennon was shot. But the building has played parts in many illustrous stories.

The building was erected in 1884 when the upper west side was still just marshland with farms. Real Estate king Edward Severin Clark wanted to target the extremely well-to-do New Yorkers and planned the most luxurious and extravagant building New York had ever seen. He hired architect Henry J. Hardenbergh to design his vision for him.
Before the building was finished, all apartments, each with at least 12 rooms, were sold. It was, and still is, one of the most prestigious places in the city. Over the years, famous people that resided in the building were Lauren Bacall, Judy Garland, Rosemary Clooney, Leonard Bernstein, Rudolf Nureyev, Boris Karloff and the Lennons to name a few. Yoko Ono still calls it home. There was a rumour that Tom Cruise was going to buy there too, but these were in fact rumours and not true.

Long before the Lennons bought their apartment, or rather, apartments as they bought several, the buiding was used as filming location for the intense adaptation of Ira Levins novel Rosemary’s baby. In the movie from 1968, the building was portrayed as  The ‘Bramford’, the brooding Gothic building where newlyweds Rosemary and Guy Woodhouse (played by Mia Farrow and John Cassavetes) set up home. 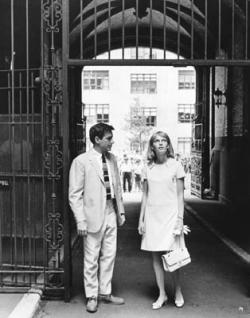 Farrow and Cassavetes at the entrance gate

John  Lennon was not the first murder victim of the Dakota. In 1978 Oscar winning actor Gig Young first shot his wife to death, before shooting himself. Ironically, he won an oscar for his role in They Shoot Horses, Don’t They in 1970. A year after Ruth Gordon picked up an Oscar for her performance as the Woodhouse’s neighbour in Rosemary’s Baby.

Still today an apartment in the Dakota is something only the immensely rich can afford. This 6,5 room apartment (half of an original) is on the market for a mind blowing $7.500.000…..

You do get your money’s worth obviously as Central Park is just across the street. The apartment itself is not too big though. The kitchen could even be referred to as small-ish. And I always wonder why Americans often don’t have separate toilets. Here you have to go through either the master bedroom, or the library which will likely end up being used as 2nd bedroom.

And I am not sure if Yoko Ono as a neighbour is a selling feature.

This entry was posted in Famous buildings and movie locations, Homes of the rich and famous, See how others live and tagged Dakota, John Lennon, New York, Rosemary's Baby, Tom Cruise. Bookmark the permalink.

3 responses to “Landmark buildings; The Dakota”