The lamps with the girl’s name. Few people know the lamp is actually named after Louis Comfort Tiffany (1848-1936).

This American glass designer patented his favrille glass technique in 1894. This technique melts regular white glass with bright coloured glass as used in leaded glass objects and windows.  Up to then the technique was limited to only a few and pale colours but he mastered it to create bolder colours. With this, he changed the art of glass colouring forever.

He founded the Tiffany Glass Company in 1885. Tiffany soon grew to be on the forefront of American Art Nouveau. He knew how to combine art with functionality and with this gained a large following of admirers. His father had previously founded the jewelery store Tiffany & Co in 1837. The latter still exists. The Tiffany Glass Studio shut their doors in 1932, a year before Louis Comfort’s death. 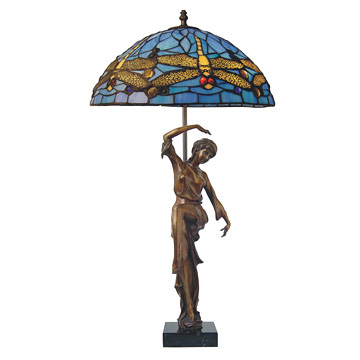 Recent research however discovered that not he, but a group of women he hired for his Tiffany studio, are the true designers of the ever so famous Tiffany signature designs. These so called Tiffany Girls worked in the studio’s glasscutting departmentwhere Clara Driscoll was in charge. Driscoll (1861-1944) turns out to be responsible for some of the most striking designs such as the Peony, Dragon Fly and Wisteria designs. 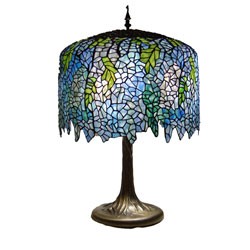 One can find many inferior replica’s of Tiffany’s lamps and lampshades on the market. There are only a few (1, 2, 3) glass studio’s that work in the true tradition of the original Tiffany technique. Some amateurs have taken up Tiffany lamp making as a hobby.