Ha, love this theme myself. As a gay boy growing up I had angst galore, so I was lucky to grow up in the 90’s as this was the era of slow paced, grunge or retro style teenage voice-overed TV  shows about kids growing up with issues bigger then themselves. Yes, I watched a LOT of TV! But the nineties also brought us upbeat and sassy sitcoms with a plot. You know, a warning (don’t drink.. ever… at all.. or you’ll die) and a joke to mark the end.
Either way, it was comforting to see that at least writers of TV shows knew a bit about what I was facing every day. Oh, and in case you wonder; I grew up being perfectly happy.

See how much you guys watched. In style with my other quizes, I will give you a few images of a TV show house, and with a small hint, ask you to come up with the name of the show.

First one, maybe not quite fitting the theme per se, but the title of this sitcom says it all. It hurts growing up.

The next house featured in a show with a girl named after the process all teenage girls go through as they grow into womanhood. She shared the house with her dad, and I believe two brothers. Being a girl, growing up in an all men family is tough. A fast talking friend named somewhere between 1 and 10 did help though.

Next one up is a classic story. Poor kid, growing up in rich household. Where Will Smith moved to Bel Air, the guy in this show moves to another posh greater LA area. It aired for four seasons before it was pulled because of deteriorating ratings.

That next house is this. 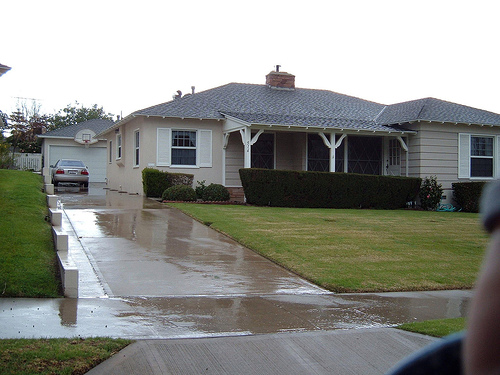 A typical suburban 1940’s bungalow. The show was set a decade or two after is was built and featured a young David Schwimmer as the older sister’s love interest. Only for an episode or three, so not sure if that counts as a hint…Like I said though, the main character’s love interest shares a surname with the love interest of the show before this one.

Oh, another hint might be that rumour has it that the side kick of the main character was played by the later to become shock rocker  Marilyn Manson… This is so far from the truth it is not even funny anymore.

The last house was featured in a show that changed teenage drama according to many TV critics. It dealt with issues such as same sex parenting, homophobia, drug abuse and best friends stabbing you in the back. The show was devoid of all the obligatory happy endings which made it a bit more real and would often even leave you feeling a bit unsettled after watching it.

The main character tries to balance her life between the expectations of her parents, her former best friend, and her much cooler new best friend. Her much cooler best friend ends up kissing the boy she herself lusts after all throughout the series. And her geeky neighbour captures a lot of her life on camera. I personally can’t help but think that this inspired the creator of American Beauty to invent the character of Ricky Fitts.