In the 17th century, tulips were at the height of fashion. So much so; that in the 1730’s, bulbs were often sold for what was at least ten times the annual salary of a skilled craftsman. This period in Dutch golden age history is often referred to as Tulip Mania. Nowadays, the term “tulip mania” is often used metaphorically to refer to any large economic bubble. Tulips however, have never lost their charm and are in style pretty much always. New types being introduced all the time, often named after famous people. They can be bought pretty much year round and can be found all over the world. No matter what your taste is, or what rocks your boat; there’s a tulip to match.

Tulips look great in a simple glass vase. Yet in recent years, the classic tulip vase has seen a revival. Design shops stock them again, in all shapes and forms. They can be glass, plastic, metal or porcelain, and come in symmetrical or anything but symmetrical shapes. A selection: 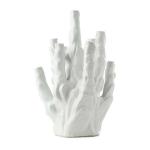 Dutch interior shop Pol’s Potten stocks this white porcelain number. It’s design is inspired on corals, according to designer Norman Trapmann. Norman might be the guy responsible for the come-back of the tulip vase actually. He designed many of the currently popular ones. He makes use of classical shapes, and pagoda style layers, or simply stacks existing shapes on top of each other to create new ones. Most of his designs are sold through Pol’s Potten but he has a website where you can find some of his work too.

I REALLY love his work actually, so an article on him coming up shortly!

This classical vase is actually a flat window adhesive/sticker. Do you remember those bright coloured figures and letters you could stick to the window in your parent’s car?  This is how that works.  You just stick the adhesive to your window. It looks great if you have a table with one end facing a window. From  distance it looks very real. Dutch online shop Bijzonder Mooi sells them in different colours and styles.
Another Dutch design shop online, Lilian’s House, stocks a few tulip vases. Smaller modern ones, and larger ones inspired by the classical tulip vase as seen in the Golden Age.

The website is a design nightmare (hence the crappy images, size was useless), and it’s mainly a resell website, but they do have some pretty cool items.