No need to feel sorry for them just yet, but the current market is hitting our celebrity friends too. Here a few famous peeps selling with a loss.

23 year old pop singer Avril Lavigne had to bring down the  asking price on her five-bedroom, six-bath house in Beverly Hills from $6.9 million to $5.8 million. It looks she might have actually sold it now. 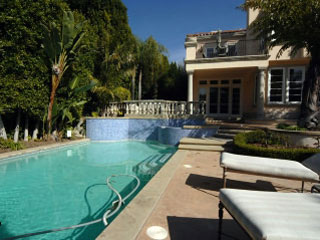 That 70’s Show star Wilmer Valderrama had to accept $200,000 less for his five-bedroom home when he got an offer for $1,75 million. He originally intended to sell his house in the relatively unfashionable and anything but des resValley neighborhood of Tarzana for $1,95 million.
Everybody Loves Raymond big guy Brad Garret reduced the price of his massive 10.000 sq ft mansion from $9,75 million to a measly $8,8 million…. He put it on the market in 2006 but has yet to sell the place.

Long haired rock guitarist Slash of former pop/rock band Guns N’ Roses feels he was screwed paying $6,2 million in January 2006 for his Spanish-style Hollywood Hills home.  He sold it last December for $5.7 million claiming it was neither as big nor as private as his estate agent claimed. He is suing the guy and the case is ongoing.
Denise Richards lost $200.000 on the sale of her white home in Hidden Hills, just north of La La Land. She sold it for $3,8 million, originally accepting offers nearer to the $4,5 million range. She bought it in June 2006 for $4 million.

Hidden Hills, how romantic a name....

Like I said; no need to feel sorry as the money going back and forth still over shadows any sum I will likely ever make, but still, it’s must be hard to loose half a million on a house, even if you’re Slash.

Posted in Homes of the rich and famous