It’s the most expensive Co-op apartment ever in NYC. But whoever has this much cash available, or gets his bank to join in, will not regret it. A whooping 12000 square feet (which is about 1200 m2) and so many terraces that one was converted in an outdoor ice skating rink for a party once. The owner, Grammy Nominated songwriter Denise Rich (what’s in a name), is selling it as she suffers from empty nest syndrome. I wonder, with a house this big, if you even notice if your housemates are home or out…..

The apartment comprises two floors with a total of 19 rooms, amazing views of the whole of Central Park a professional recording studio, gym and billiard room and several kitchens and full bathrooms.

At $5.400 per square foot, it’s actually quite a lot ‘cheaper than the record condo — not co-op — price of $13,000 per square foot, which is what former Citigroup Chairman Sandy Weill’s triplex at 15 Central Park West recently sold for. I have yet to figure out what exactly is the difference between an co-op and condo, but my guess is it has to do with full ownership? Anyhow; not intending to buy either anytime soon so plenty of time to worry about that later. 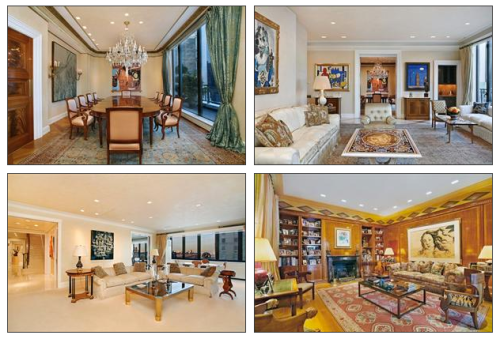 Posted in Homes of the rich and famous, See how others live, Unusual homes

So I heard from Big Mama, of Real Estalker fame, that Jason Statham, an actor we like for the very obvious reasons, is selling his Mid-Century architectural gem above the Sunset Strip.  Listing information shows it has 3 bedrooms, 3 baths, a swimming pool and a smallish yet private and secluded garden.  With 2281 square feet it is modestly sized. But the location is sure going to attract buyers who like to combine the hustle and bustle of the strip with the quiet and calm of the hills. I love those glass-wood-graphic-open style homes. This one reminds me a bit of the home of Colin Firth in A Single Man.